The past few months have spelled trouble for Huawei and its fans. Despite the U.S. government’s constraints, Huawei seems to be faring well and has been built upon its catalog of products. In India, it just announced a new smartphone — the Huawei Y9 Prime — as its newest mid-range contender. Huawei’s latest smartphone features a large, notchless display, triple rear cameras, and a pop-up selfie camera as its major highlights.

The Huawei Y9 Prime comes with noticeable upgrades over its predecessor, the Huawei Y9 (2019), which was actually launched in late 2018. While the improvements on the Huawei Y9 Prime are externally visible, the Y9 Prime is also equipped with a larger 128GB internal storage chip. Moreover, Huawei can be expected to reap the benefits of the recent distribution pact it inked with Micromax to place the Y9 Prime in smaller towns and cities of India where consumers still rely on purchasing smartphones through brick and mortar stores. Huawei brands the Y9 Prime as the “Pop-up King,” which appears to be a gaudy claim since both OPPO and its off-shoot brand Realme have more premium smartphones with pop-up selfie cameras in this price segment. Here, Huawei takes the lead with a spare camera sensor on the back that brings the advantage of wide-angle photography. Since numbers matter more in this price range, the proposition of three cameras over two could actually lure consumers to the smartphone.

We were present at the Huawei Y9 Prime launch event in New Delhi, India, and here are our first impressions after interacting with the smartphone for a short while.

The Huawei Y9 Prime is built to attract smartphone users who aren’t very fond of notches. While Vivo recently took the route of a hole-punch display with the Z1Pro, Huawei opted for a more symmetrical design in the Y9 Prime. Further, Huawei appears to have taken care of other common demands by including a USB Type-C connector and a 3.5mm headphone jack. Next, the Huawei Y9 Prime retains a physical fingerprint scanner on the back and users may feel at home with its familiar placement. Speaking of the rear, the Huawei Y9 Prime comes with a dual-texture design packed under a sheet of plastic. There are two colors to choose from — Sapphire Blue and Emerald Green. We got our hands on the green variant, and it looks like it has a dark turquoise color. As you can see in the images, it almost tends to look blue in indoor lighting.

The back is curved along the edges and that makes the smartphone feel lighter than it actually weighs. The frame of the smartphone is made of metal. The back panel is fairly reflective and you can spend a decent amount of time appreciating the patterns of light bouncing off of it. A large 6.59-inch display with minimal bezels or and no cutouts leads to a 91% screen to body ratio. The massive size does not really make the smartphone fit like a glove in the hands of the average user, but those who cherish long hours of media consumption on their smartphones are likely to treasure it. This is an IPS LCD panel so the colors aren’t as vibrant as on AMOLED displays from smartphones like the Realme X. There’s a cool tinge in the display as with other LCD panels. The bezels on all the sides except the bottom are thin and do not hamper your viewing experience. The pop-up selfie camera is located on the top left of the smartphone, and it takes a full second to draw out. This is perhaps the slowest pop-up camera I’ve come across. Further, while Huawei claims that the mechanism is sturdy enough to bear a weight of several kilos, the company doesn’t speak of any protective layer over the pop-up camera’s glass.

Cumulatively, the Huawei Y9 Prime emerges as a well-built device with its rounded corners and the frame enabling a comfortable grip. The shiny dual-textured back is likely to impress. The pop-up camera helps Huawei achieve symmetry of the display and a high screen to body ratio — the only trade-off with is its slow pop-up speed. Mind you, the speed cannot be increased with software upgrades in the future. Apart from that, the Huawei Y9 Prime can be graded well in terms of its design and display.

Speaking of software features and future updates, the Huawei Y9 Prime runs EMUI 9.0 based on Android 9 Pie. Huawei is in the process of slowly rolling out EMUI 9.1 with cleaner and more minimal software elements and we anticipate that the Y9 Prime will also be on that list. For now, the company seems pretty confident with upgrading the smartphone to Android Q, in spite of the possibility of losing its Android license. We await for a judgment by the U.S. Department of Justice in this matter later this month. But for now, Huawei has assured us that its Android updates won’t be affected.

The user experience that EMUI 9.0 offers on the Y9 Prime is identical to what we see on other Huawei devices. Mishaal, our Editor-in-Chief, took a really deep dive into the EMUI 9.0 experience in his two-part review of the Android skin. Meanwhile, if you’re not as skeptical of Huawei’s update claims, you can go ahead and check out our early hands-on of EMUI 10 based on Android Q.

Update (8/06/19): Huawei has confirmed that the EMUI 9.1 update has begun rolling out to the smartphone and users shall be receiving it within a week. We can expect newer units to come with EMUI 9.1 out-of-the-box.

The smartphone is powered by the HiSilicon Kirin 710F along with 4GB of RAM. The advantages of the Kirin 710F over the regular Kirin 710 are not clear, but we were informed that the processor has slightly better performance. The only storage option available to buyers is 128GB and that should suffice for most users. We’re not sure if this is eMMC or UFS 2.1 and will update the article after Huawei provides us with this information.

The cameras on the Huawei Y9 Prime make for a compelling bid. Among the triple camera setup, there’s a 16MP primary sensor with an f/1.8 lens. In addition, there’s an 8MP wide-angle sensor which facilitates 120-degree images and the lens paired with it has an aperture of f/2.4. Lastly, there’s a 2MP depth-sensing camera with an aperture of f/2.4. This setup is quite similar to the triple camera array on the Honor 20i/20 Lite with the only difference being in the aperture of the wide-angle lens. Meanwhile, inside the pop-up, there’s a 16MP camera including an f/2.2 aperture lens.

The Huawei Y9 Prime comes with the same EMUI camera app as other Huawei and Honor devices. Besides a comprehensive layout of features, the camera app supports features such as various portrait effects like Stage Lighting as well as some AR stickers. We were inside a small green room, so it’s hard to judge the quality of the rear camera based on these images.

The front camera notably supports 4-in-1 pixel binning and furnishes selfies with ample lighting and detail. Fortunately, the camera app does not appear to be smoothening the skin like other Huawei/Honor device. 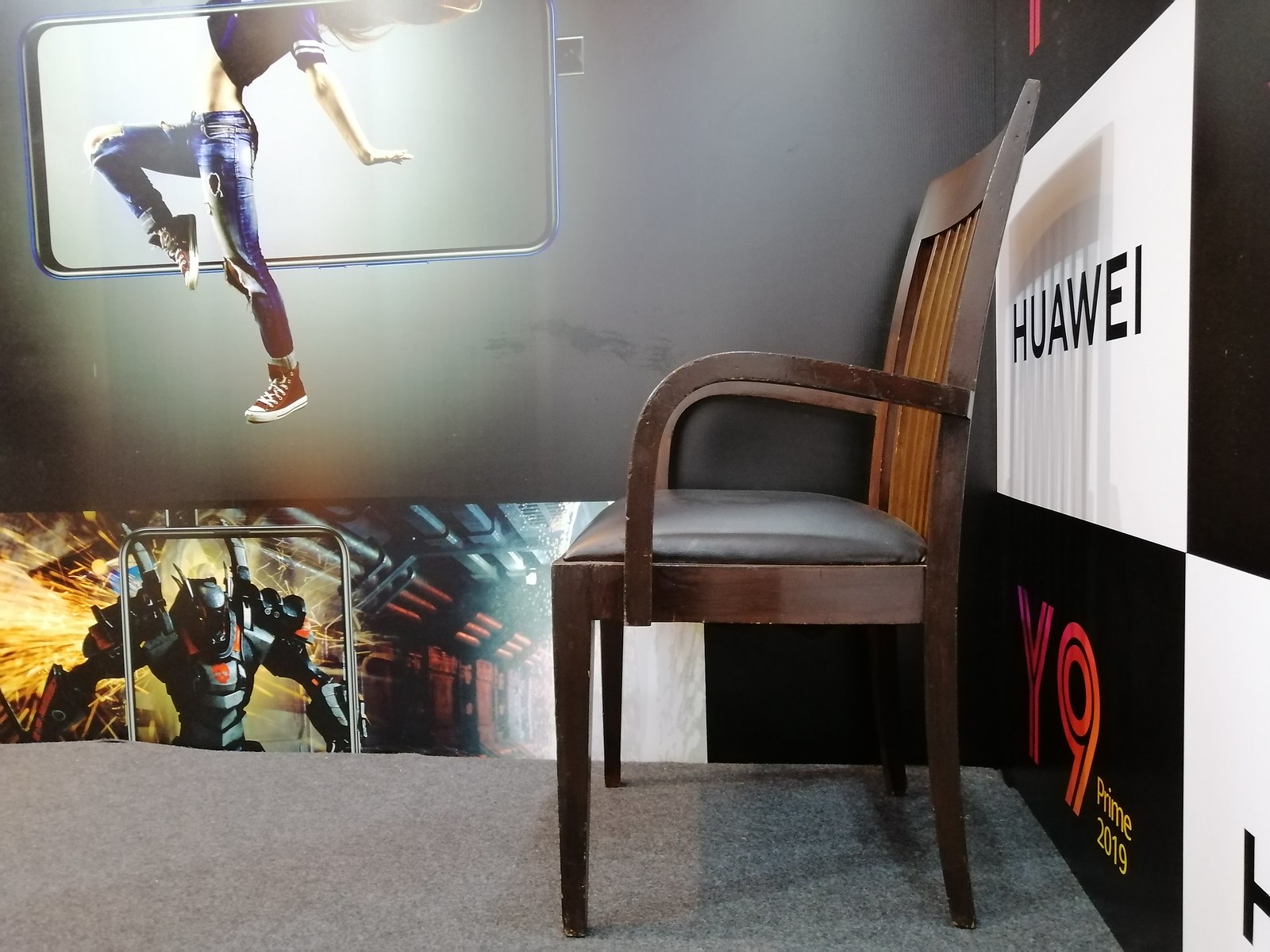 Huawei says that the so-called AI scene detection function can identify 500+ scenes from across 22 different categories to embellish images with more contrast and better colors. We hope to learn more about the camera’s output only after a rigorous analysis, but since the primary camera is the same as the Honor 20i, you might find some cues in our camera comparison between the Honor 20i and the Realme 3 Pro.

The Huawei Y9 Prime appears to an interesting device based on what we’ve seen so far. Besides the eye-catching colors, the large display, a physical fingerprint scanner, and 128GB storage are what should make the cut for most users looking for a well-balanced and affordable package.

Since the online market in India appears to be fairly saturated, I see this device selling better in the offline segment where appearance and factors such as a third camera play a more important role than the actual quality of its deliverables. Competitors at this price point include the Realme X, Realme 3 Pro, Honor 20i, Redmi Note 7 Pro, Vivo Z1Pro but if you eliminate options with a notch, only the Realme X and the Vivo Z1Pro (with its hole-punch display) remain in the competition. Huawei seems to have priced the Y9 Prime well, making it the most affordable smartphone with a pop-up selfie camera in India. The smartphone will be available starting August 7th via Amazon India for ₹15,990.

Buyers will be able to get an extra ₹1,500 discount on exchanging an older smartphone, and a 10% discount using SBI cards during Amazon India’s freedom sale next week. There are freebies worth ₹4,598 for pre-orders via offline retail channels which effectively bring the price of the smartphone down.

Note: Huawei has stopped providing official bootloader unlock codes for its devices. Therefore, the bootloaders of their devices cannot be unlocked, which means that users cannot root or install custom ROMs.